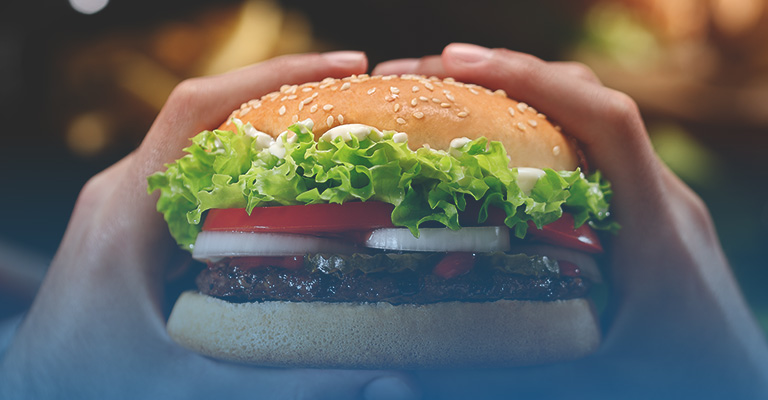 Burger King® started its activities in Turkey in 1995 when TAB Gıda Sanayi A.Ş., affiliated within the structure of ATA Group which acquired the rights of being the main developer and manufacturer in Turkey and soon became the address of irresistable tastes and added new units to their restaurant chains.

Operating under the assurance of TAB Gıda, Burger King always pays great attention to production and service at international quality and hygiene standards, and the importance it attaches to developing a rich and delicious product range and continuous training is the basis of its current success. Burger King® is one of the leading brands in its sector in Turkey and today it gives quick service to taste lovers with more than 650 restaurants throughout Turkey.

Burger King®'s "Fire is Calling You!" campaign which was highlighting the power of the Whopper® fire with an amusing way, was awarded the Bronze Effie at the “Effie Awards". It was selected "Turkey's most popular fast-food brand 5th time according to "Turkey's Lovemark research Conducted by Ipsos for MediaCat. In the Crystal Apple Creativity Awards, Burger King® won the "crystal" apple award in the Press/Beverages category with the "Fire is Calling You" campaign, in the category of FILM-TV and Cinema/RETAIL, SALES, E-COMMERCE. It was awarded "The Coolest Brand" the 3rd time in "Fast-Food" category at "Turkey's Cool Brands" survey carried out with the cooperation of Marketing Türkiye and Roamler Türkiye magazines. It has been shown as an example by ‘Google’ with his digital marketing works it has implemented for Pro Gamer menus that it has developed for game enthusiasts.

Burger King® was named "The Most Reputable Brand of the Year" in the "Fast Food" category within the scope of The ONE Awards Integrated Marketing Awards organized jointly by Marketing Turkey and Akademetre in 2019. It was awarded the No. 1 Brand title at “Self Service – Restaurant” category in the “Most Admired and Preferred Retail Brands in Shopping Malls” survey conducted in collaboration with the Association of Shopping Centers and Investors (AYD) research company AKADEMETRE. It was awarded the first place in the “Restaurant-Cafe” category according to the results of “Good Life Brands Research” conducted for the second time by Nielsen for the global brands group Sustainable Brands Istanbul. It was awarded a Gold Effie in Effie Turkey Advertising Effectiveness Awards which is one of the world's most challenging and prestigious competitions in marketing and communications, organized in collaboration with The Advertising Agents Association, The Association of Advertisers, and Effie Worldwide Inc with its “We're firing basketball” campaign which was realized under the sponsorship of EuroLeague. According to the Turkish Reputation Index survey conducted under the academic supervision and rapporteur of the Statistics Department of Yildiz Technical University (YTU), it was awarded “The Most Reputable Brand in Turkey” Award in the category of "Fast Food” in the restaurant sector. It was deemed worthy of the two awards in the "Fast Service Restaurants" category at A.L.F.A. Awards which was organized in cooperation with Marketing Turkey and AKADEMETRE. With the votes of the public jury of 1200 people, Burger King® was selected as "Customer Brand" and awarded the first prize in the "Fast Food" category, and became one of the leading brands in the sector in terms of "Employee Satisfaction Experience".

In 2022, Burger King® was selected as the technology brand of the year in the “Quick Service Restaurant-Hamburger’’category in Tech Brands Turkey. Burger King® was named as "The Most Reputable Brand of the Year" in the "Self Service – Restaurant" category within the scope of The ONE Awards Integrated Marketing Awards which is the first and only event to reward brands and stakeholders that have increased their reputation the most during the year.

Burger King operates under the roof of RBI (Restaurant Brands International) following its takeover by investment company 3G Capital, headquartered in Rio de Janeiro, Brazil, in October 2010. The operations of the brand in Turkey have been carried out continuously by a Turkish company, TAB Gıda, for 24 years.